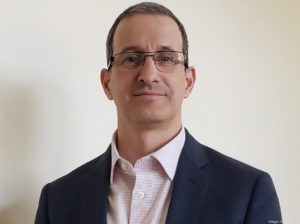 Earlier this year, the Federal Trade Commission said it received approximately 1.4 million reports of identity theft in 2020. Identity thieves steal another person’s information, like their name or social security number, to commit fraud. And there are several different types of identity fraud, anything from online shopping fraud to tax identity theft to credit card fraud.

But one Boston area startup which recently worked with the Federal Reserve is looking to tackle a new type of identity theft. FiVerity, founded in 2017 by Greg Woolf, is attempting to provide financial institutions with AI solutions for detecting cyberfraud, specifically synthetic identity fraud (SIF).

With SIF, hackers mine the dark web with their own AI automation tools to find compromised identity credentials. Then, these hackers combine information from several different people to create a new false identity. With this manufactured identity, they can open new accounts within a financial institution.

“They’ll ramp up all these balances on their credit cards and personal loans, and then go buy a bunch of cars and auto loans, and they look like real people,” said Greg Woolf, CEO and founder of FiVerity. “And the bank is only too happy to have them as a customer. And then all of a sudden, they start defaulting on the loan, they disappear. That’s called a ‘bust out.'”

The bank ends up as the “ultimate victim,” according to Woolf.

To fight SIF, his company has developed a machine learning platform that uses “human-in-the-loop” capabilities to detect cyberfraud, meaning that FiVerity’s AI learns directly from human analysts, who teach the system how to detect strategies from cybercriminals. Once the AI learns about these tactics, it is able to predict and identify instances of cyberfraud.

Woolf said that when FiVerity started, the company’s platform was able to help financial institutions identify 20 percent of fraudulent accounts, which would have normally gone unnoticed. But since FiVerity’s platform utilizes “human-in-the-loop” technology, which is constantly learning from analysts and fraud detection experts, the company’s ability to identify fraudulent accounts has increased to 50 percent.

Another unique aspect of FiVerity is that the company collaborates with a number of institutions within the industry to create an open community.

“There’s a willingness to share and to learn from each other,” Woolf said. “We have a group of banks and credit unions that are sharing intelligence around the fraudsters in a community fashion. And the key thing here is we’re sharing it in a fashion that protects private information, because data privacy is massive for banks.”

Separately, in 2020, the Federal Reserve created a focus group — which included FiVerity, Mastercard, USAA, and other institutions — to develop an industry definition for synthetic identity fraud.  Last week, this definition was officially released: Synthetic identity fraud is “the use of a combination of personally identifiable information (PII) (Off-site) to fabricate a person or entity in order to commit a dishonest act for personal or financial gain.”

“Coming up with a standard identifier will provide banks and credit unions…with the ability to reserve the tools to identify it,” Woolf said. “And secondly, the common definition will allow everybody to get on the same page.”

In March, the company closed a $2M round of financing. According to the company’s website, investors included Mendoza Ventures and a number of “super angels” within the cybersecurity and financial services industries.

When asked about FiVerity’s plans for the future and how the company will utilize its new investment Woolf said said they recently hired a new lead for their AI and machine learning data science program.

“That’s where we’re going to be investing mostly in terms of growing the market, as well as product expansion and really becoming the dominant player in space,” he said.

Twenty financial institutions are collaborating to identify how machine learning can be used to detect synthetic ID frau...

Companies have been forging ahead with digital transformation at an unprecedented rate. This trend has accelerated over ...